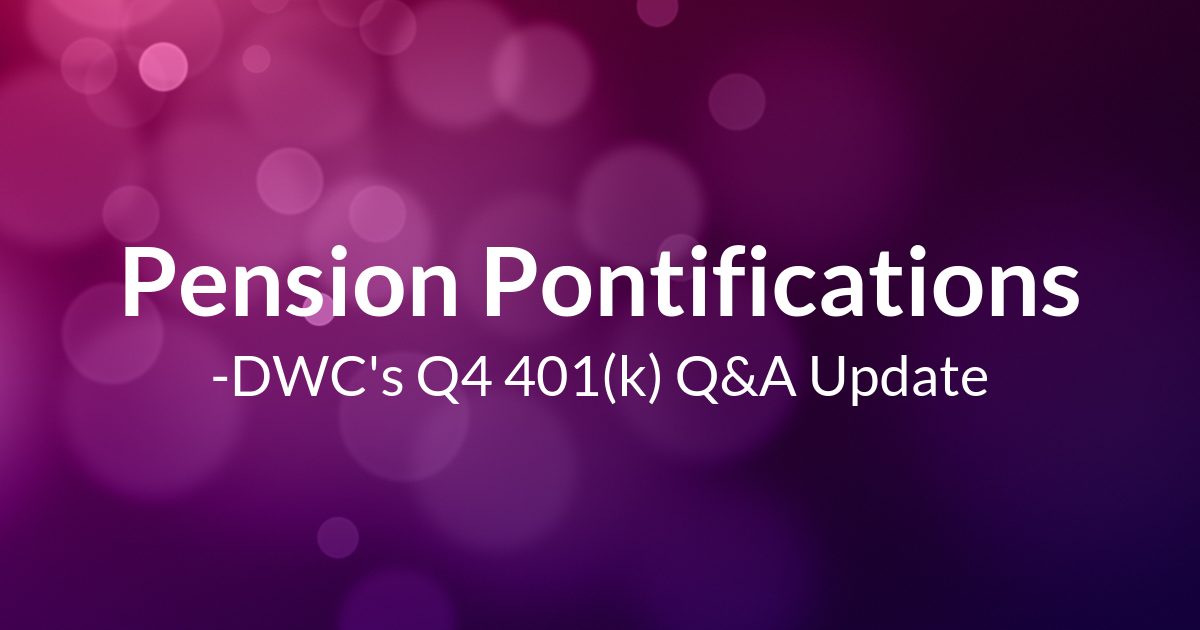 All of us here at DWC thrive on the really geeky stuff, and some of the best discussions start with our pontifications about how different topics impact our clients and our industry.  We decided to bring the best of those conversations to you, still with a touch of geekiness but also distilled into easily digested, bite-sized pieces.

This quarter we're taking a look at fraudulent distributions and breaking down what to expect from Washington in the coming months. (Crystal ball not included.)  - As originally published in our Q4 401(k) Q&A Update newsletter.

Fraud is on the rise, and retirement plans are not exempt.

While cybersecurity is on the tip of everyone’s tongues at the moment, some of the distribution fraud is distinctly low-tech in nature.  A call to a recordkeeper’s call center to ask about the distribution process provides the road map.  Criminals can then obtain much of the information necessary to complete a participant distribution request form from social media and company websites.  With many signatures being inconsistent or even mostly illegible, even a poorly copied or forged signature can be difficult to detect as fake.

If hard copy forms are submitted (including by fax or email), plan sponsors should have a process in place to review and confirm the identity of the participant before processing to lessen the risk.  In-service withdrawals seem to be a more common target, and request for large amounts should be red flags.  Some service providers are considering re-introducing medallion signature verifications, which is more secure but inconvenient for participants.  That certainly stokes the ongoing debate about where the appropriate balance lies between convenience of access and security.

Other service providers are considering how best to push participants to online transactions.  Unfortunately, fraudulent transactions are occurring online as well.  However, with multi-factor authentication and other forms of more sophisticated identity verification available, online transactions can provide additional security.

With these types of transactions occurring at an ever-increasing frequency, our recommendation is for all plan sponsors and fiduciaries to contact their recordkeepers to understand their identity verification processes and the technologies they employ.  Although not quite in keeping with the push toward robo this, automated that or DIY the other thing, we also suggest that plan sponsors verify distribution requests (particularly in-service distributions) the old-fashioned way…by contacting the participant and confirming he or she actually submitted the request.

At a minimum, documenting the review of the distribution process shows fiduciary due diligence.  Beyond that, understanding the process makes it easier to set appropriate expectations with participants.

Finally, all plan sponsors should limit which of their service providers (and internal personnel for that matter) are authorized to discuss account details with participants.  As a general rule, only those who have processes in place to verify identities (either by knowing the person or through technology) and record interactions (such as phone calls) should be permitted to assist participants with anything beyond general plan information.  This will usually be limited to the plan’s recordkeeper for phone or online transactions and may also include plan sponsor personnel and/or the plan’s investment advisor for face-to-face interactions.

DWC works with many of the top recordkeeping service providers that are using technologies such as multi-factor authentication and/or voice verification.  Since retirement plan rules mandate that paper distribution forms still be made available, plan sponsors should take the extra time to contact any participant that has submitted a hard-copy request directly to the recordkeeper.

It might not be convenient, but it’s a cake-walk compared to being faced with making the plan whole following a six-figure fraudulent payout.

What to Expect from Washington

Without a crystal ball, what Washington is going to do next is anyone’s best guess.  Regardless of which side of the political aisle you typically sit, I think we can all agree that Congressional progress has proven quite elusive recently.  So, what does all that mean for retirement policy?  Well, recent polling has suggested that retirement security is one of the top financial worries among working Americans, and when something becomes that important to voters, it becomes important to those who want votes.

Retirement plans are no longer just a line item used to balance the budget for broader tax legislation, they have become a subject unto themselves, as evidenced by a nearly 50% increase in the number of retirement proposals introduced from last year to this year.  The most recent of these was introduced on November 26th by Kevin Brady (R-TX) who is the current Chair of the House Ways & Means Committee and includes some of the following provisions:

Interestingly, Richie Neal (D-MA) who will succeed Brady as Chair in the next Congress, opposed the bill.  He supports the provisions, but he wants the legislation to follow a more deliberative process rather than rushing it through.  Even if the House can muster the simple majority needed to pass the legislation, the 60 votes needed in the Senate seem like an uphill climb, especially with projections of it adding north of $50 billion to the deficit.

Of course, the current climate is not without its share of controversy.  Even though there is broad bi-partisan support for many of the retirement provisions that have been introduced, any number of unrelated matters from the Mueller investigation to border security to the tariff situation can quickly erode any sense of cooperation.

While it is not out of the question that the upcoming change in control of the House of Representatives might be just the impetus the Republican Party needs to find a way to enact retirement legislation before year-end, the looming showdown over shutting down the government (postponed by the passing of President Bush) makes it likely that nothing else of consequence will get through Congress before it adjourns for the year in a couple weeks.

Rest assured that we will be watching the legislative outlook and will let you know if/when there are any significant developments.