DWC News Update | The SECURE Act Has Snuck Through 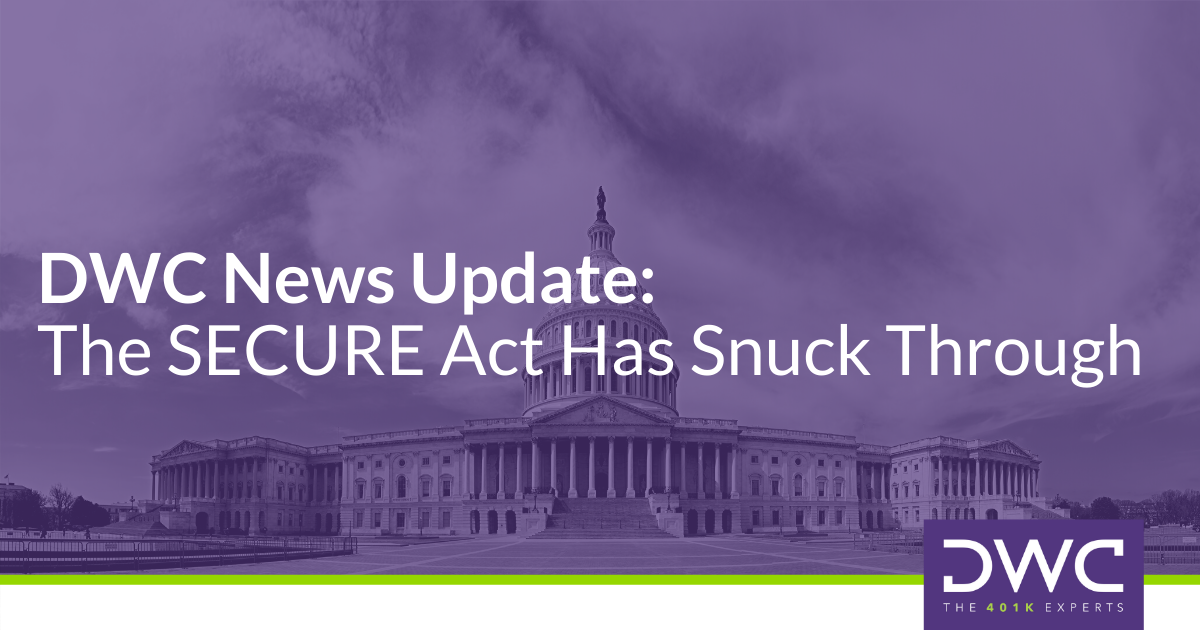 (Updated 12/23/2019) Late Friday evening (aboard Air Force One leaving DC for his holiday retreat), President Trump signed the spending bill that included the SECURE Act. In a bit of last-minute maneuvering in Washington, DC, the House of Representatives added the provisions from the SECURE Act to the spending bill that had to be passed by Friday to avoid a government shutdown.  Although the provisions that were problematic before are still part of the mix, the political climate is such that both parties wanted political wins and neither wanted to risk being branded as the one that “allowed” or “forced” another government shutdown.

Given the magnitude of the changes this presents to the retirement plan world, it is surprising that the legislative text for the SECURE Act provisions is only 119 pages, and that is with narrow margins and 12-point type.  That means the language provides only broad-brush changes with the details to be filled in by regulation at some point in the future.  As a frame of reference, the Pension Protection Act of 2006 directed the Department of Labor to issue regulations on participant benefit statements by 2007…those regulations still have not even been proposed 13 years later.

In our review of the legislation we found some useful provisions, but probably the most significant is the creation of Pooled Employer Plans – basically open MEPs.

These provisions are effective for plan years beginning on or after January 1, 2021.

All of that is covered in only 20 pages of legislative text, so that should give you an idea of how sparse the details are.

Here is a quick rundown of the other key provisions:

There are some other miscellaneous provisions that relate to certain frozen defined benefit plans, 529 plans, benefits to firefighters, and treatment of educational stipends as compensation for IRA purposes.

With the exception of PEPs and the long-term, part-time employee provisions which are effective in 2021, most of these other changes are effective for plan years beginning on or after December 31, 2019.  Yep, you read that correctly…in less than two weeks from now.

Stay tuned for more details.  We will continue to stay on top of this and will keep you up to date.  And if you are wondering whether DWC plans to be part of the Pooled Employer Plan fun, the answer is a resounding YES!