In our last episode, we mentioned we would move on to developing an ideal funding policy. Before doing so, we realized there is one more aspect of the maximum allowable contribution we need to cover – tax deductibility. After all, the need for additional deductions is one of the main drivers for businesses to setup cash balance plans in the first place.

Although this column focuses primarily on cash balance plans, most companies that have one combine it with a 401(k) profit sharing plan, and it is these combo situations that can make the calculation of the maximum available tax deduction a little more complicated.

Let’s say our friend Robert, owner and only employee of Robert Smith, Inc., decides he wants to adopt a 401(k) profit sharing plan to go with his cash balance plan. No problem! He has plenty of time to setup the plan and maximize his pre-tax 401(k) deferrals at $26,000 for the year ($19,500 in regular deferrals + an extra $6,500 in catch-up deferrals since he is over age 50). Robert is able to fully deduct these deferrals in addition to the cash balance contributions the company makes. But what about a match or profit sharing contribution?

Let’s first take a brief step backwards. We’re back to a bit more math on this one, so please bear with us. For a stand-alone defined contribution plan such as a 401(k) profit sharing plan, the maximum the company can contribute is equal to 25% of the sum of the compensation paid to all employees who are eligible for the plan. So, if covered payroll is $1,000,000, the maximum deductible company contribution to the DC plan is $250,000.

When it comes to a stand-alone defined benefit plan such as the cash balance plan sponsored by Robert Smith, Inc., we are already familiar with the maximum deductible contribution amount. It is equal to the maximum contribution we discussed in our last episode of the Corner. In other words, it is the amount necessary to bring plan assets up to 150% of plan liabilities.

Wouldn’t it be nice if the combined deduction limit was as simple as just combining the two limits we just discussed? Believe it or not, it is that easy in some cases…but not all of them, and definitely not in Robert’s case.

When a defined benefit plan is covered by the Pension Benefit Guaranty Corporation (PBGC), that plan sponsor is able to take advantage of the maximum deduction limits separately in both its DC plan and DB plan. That means up to the full 25% of pay in matching and/or profit sharing contributions plus up to 150% of liabilities in the DB plan. That begs the question of which plans are covered by the PBGC. As we discuss here, it is easier to note which plans are not covered. In short, other than the following, all defined benefit plans are subject to PBGC coverage:

We will delve more into PBGC coverage in a later column, but this will suffice for now.

Since the Robert Smith, Inc. Cash Balance Plan covers only the substantial owner – Robert – it is not covered by the PBGC and, therefore, is not able to take full advantage of the maximum deduction limits separately for his two plans. Instead, if the total company contributions to both plans exceed 31% of eligible plan compensation, the portion going to the DC plan is capped at 6% of eligible plan compensation. As long as the company contribution to the DC plan remains at or below 6% of pay, Robert Smith, Inc. can deduct the full maximum DB contribution regardless of what percentage of pay it works out to be.

Let’s apply all of this to what we know about Robert from our last few installments.

Since we are well above that 31% limit, the maximum combined matching and profit sharing contributions that Robert Smith, Inc. can contribute and deduct for the year is limited to $9,000 (6% of $150,000). While well short of the $37,500 in profit sharing that we mentioned above, the combination of the two plans provides Robert with tax deferrals totaling $135,000 as follows: 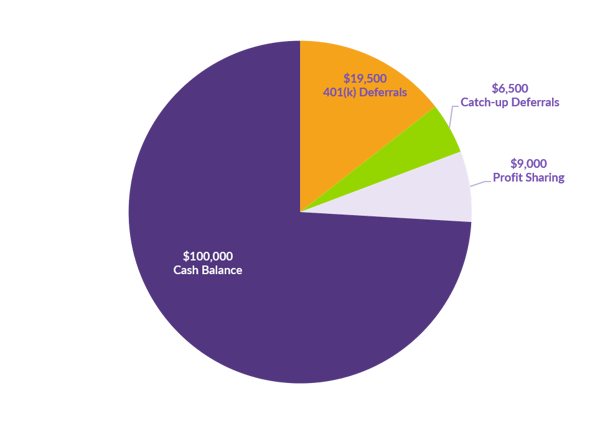 Even with the 6% limit, this is still more than double what he could achieve with just a 401(k) profit sharing plan.

Why is there this 6% limit, you ask? Well, we give the same answer that applies to many of these questions – because Congress said so. We know, it’s no more enlightening now than when our parents gave that answer as kids.

So, you may be wondering what happens if the total company contributions exceed these limits. Bad stuff – like 10% excise tax bad stuff. Plus, the portion of the contribution that is not deductible is applied to reduce the maximum deduction limit in each subsequent year until the entire amount of the excess is used up. For that reason, we would direct Robert to make sure he gets his full 401(k) and catch-up deferrals processed timely before the end of the year but to hold off on depositing the profit sharing contribution until after year end when we are able to calculate his maximum deductible contribution.

Ok. In our next episode, we will return to our regularly scheduled programming.

Want a printable version of this article to take with you? Click here.

If a defined benefit plan makes sense for your company, DWC can work with you to design a plan that accomplishes your objectives while maintaining maximum flexibility. Contact us today to get started.