Can We Increase Profit Sharing Contributions and Decrease Salaries to Improve Testing and Save Money?

We want to make job offers to some new employees and are looking strategically at our overall compensation package. Some of these candidates are seeking upwards of $130,000 which will make them highly compensated employees (HCEs) in 2021. We are thinking about negotiating a lower salary of $100,000 with a promise of $30,000 in profit sharing contributions. Not only would it help our annual ADP test results to keep their pay below the HCE limit, but it would also reduce costs (for us and them) related to Social Security and Medicare withholding.

Are there any issues with negotiating lower salary and a higher profit sharing contribution?

Although we can definitely see the appeal of this type of arrangement, you will want to run, not walk, away from doing so. However, there may be other options to address your concern about the impact on test results.

Before we get into the ways to improve the design, let’s work through why the proposed “compensation package” is too good to be true.

The arrangement described above results in the participant making an election to forego receiving compensation in his/her paycheck and, instead, having it deposited into the retirement plan. This is what is referred to as a “cash or deferred arrangement” or CODA (yet another acronym).

If that sounds a lot like a 401(k) deferral, it’s because that is exactly what it is. Any dollars a participant chooses to put into the plan, rather than receive as pay, is considered an employee deferral and is subject to the regular IRS annual deferral limit. For 2020, that limit is $19,500 for those under age 50 and $26,000 for those over 50. Regardless of the participant’s age, a deferral of $30,000 would exceed that limit.

Profit sharing contributions, on the other hand, are made at the sole discretion of the company. They are referred to as nonelective contributions because they are not based on participant elections. Documenting the promised $30,000 contribution in any sort of offer letter would demonstrate that it was, indeed, a participant decision and create the paper trail confirming the existence of a CODA.

Could you make a promise of profit sharing with a wink and a nod rather than include it in an offer or contract? That is definitely not something we would suggest. For starters, it would not change the nature of the arrangement. It would still be an impermissible CODA, just without the paper trail documenting the violation of rules. However, it also creates an undesirable position for the participant. S/he would have no guarantee the contribution would actually be made and no recourse if it isn’t.

Rather than trying to navigate these dangerous waters, there may be plan design alternatives that can address your testing concerns. One way is to restructure the “who” of your HCE group via what is called the Top Paid Group election. This option allows you to limit this group to those in the top 20% of your employees, ranked by compensation. Note that those who own 5% or more of the company are always considered HCEs regardless of their pay. Depending on the composition of your workforce, the Top Paid Group may be an effective way to reduce the number of participants who are considered highly compensated for a given year.

Let’s look at a quick example, using the following census: 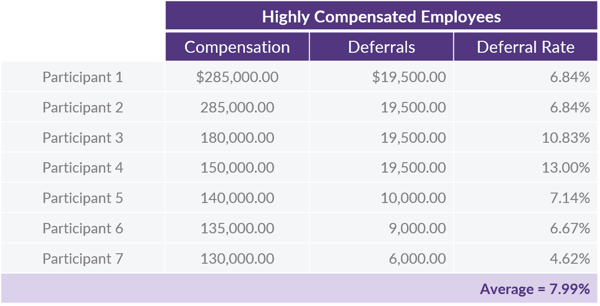 Assuming compensation levels have remained the same year-over-year, Participants 1 through 7 are highly compensated based on compensation alone. In this scenario, the plan fails the ADP test for the year, because the HCE average exceeds that of the Non-HCEs by more than two percentage points.

If we utilize the Top Paid Group, the plan is capped at only 3 HCEs based on compensation (12 participants x 20% = 2.4 participants). With only Participants 1 – 3 as HCEs, the average deferral rate increases to 8.17%. However, moving Participants 4 – 7 to the non-HCE group increases their average to 6.55%. Since the averages are now within two percentage points of each other, the plan passes the ADP test.

The Top Paid Group election must be reflected in the plan document, so a plan amendment is necessary to implement it and must be adopted no later than the last day of the year in which it will first be applied.

If you’re hiring new employees and you need assistance reviewing their impact on your plan, your DWC team is happy to explore that with you. We’re always glad to work through a plan design review and offer suggestions that make better use of your HR dollars, while making sure you don’t accidentally step into murky waters.

Want a printable version of this article? Click here.