Now that we know the basics, we can apply our knowledge to (almost) real life scenarios. We will follow our fictitious company: Robert Smith, Inc., an S-corporation with no employees other than the owner. Robert is an accomplished song writer who is currently living off royalties from his hits. Robert sponsored a SEP for many years, then at the request of his accountant and investment adviser, switched to a 401(k) plan. This has worked well, and he has met his savings goals of about $60,000. 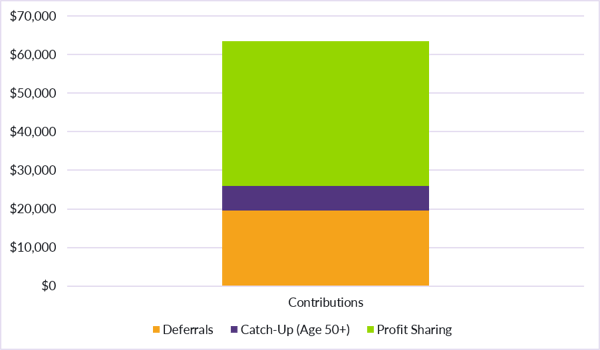 With W-2 pay of $150,000 for 2020, Robert can defer $26,000 ($19,500 in “regular” deferrals + $6,500 in “catch-up” deferrals) out of his paychecks either as pre-tax or Roth, and Robert Smith, Inc. (the company) can make profit sharing contributions of up to $37,500 for a total of $63,500. These limits are indexed for inflation each year. The current and historical limits are available here. It might seem silly to distinguish between individual deferrals and company contributions when Robert is the only employee, but as we will see, it can be a pretty important distinction even though it all ultimately comes out of his pocket and is for his benefit.

Due to his success, Robert’s income has been steadily increasing. Not only does that mean he would like to save more for retirement, but he is also looking for ways to minimize his tax burden. His accountant has recommended looking into a cash balance plan. Robert is currently age 52. Based on current cash balance limits, this allows the company to make (and deduct) contributions of more than 100% of his compensation. For now, Robert would like to set up a cash balance plan with a contribution amount of $100,000 per year.

Coordinating with the 401(k) Plan

Adding a cash balance plan does not affect Robert’s 2020 deferral of $26,000, but here is where that distinction we mentioned earlier becomes important. If the sum of all contributions made by the company (profit sharing and cash balance, in this case) exceeds 31% of total plan compensation for a given tax year, then the maximum tax-deductible profit sharing contribution is limited to 6% of plan compensation.

This is because the Robert Smith, Inc. Cash Balance Plan will not be covered by the Pension Benefit Guaranty Corporation (PBGC). We will dive into this in more detail later, but here is a quick overview. Since the cash balance contribution is about 67% of plan compensation ($100k/$150k), the profit sharing contribution is capped at $9,000 (6% of $150,000). However, that still allows for total tax-deferred retirement savings of $135,000.

The cash balance contribution credit must be specified in the plan document and be what is called “definitely determinable.” In Robert’s case, this can be defined in several ways. One is to simply state that it is $100,000 regardless of his actual pay.

Another is to define it as a percentage of plan compensation, or in Robert’s case, 66.67% (which means the dollar amount will change as his pay changes).

But what if Robert’s pay decreases and he no longer wants to contribute $100,000? Or, what if his pay increases but he does not want the contribution amount to increase? In most cases, it provides more flexibility and is a best practice to define the contribution credit as a combination of a flat dollar amount or a percentage of pay, if lower. For example, we would suggest defining Robert’s contribution credit as $100,000 or 66.67% of plan compensation, if lower. This way, if Robert is having an off year and wants to control costs, he can reduce his W-2 pay, which will result in a corresponding reduction of his contribution amount. 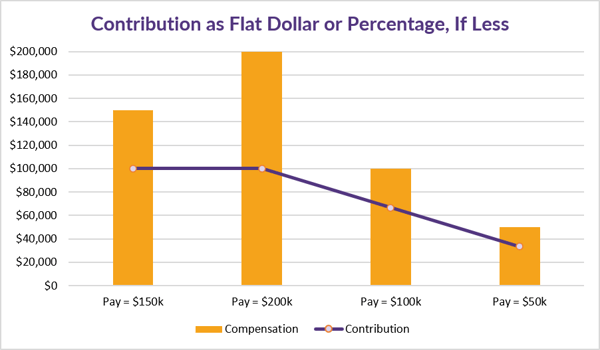 Avoiding a Potential Problem: Not Having Enough W-2 Compensation

There is one particular issue involving S-corporations that we see at least once a year, and that is shareholder compensation being less than expected. Shareholders of S-corps generally receive two types of pay: W-2 compensation (usually paid throughout the year) and distributions of company profits (usually paid out after the year ends). The catch is that only W-2 compensation can be considered for purposes of all the various plan limits. That means distributions of profits are disregarded.

It is not uncommon that we are provided with census data during the proposal/plan design stage that shows owner pay well in excess of the maximum considered compensation ($285,000 for 2020) only to have the actual W-2 reflect a much lower amount at year end, with the remaining amount paid as distributions and reported on Schedule K-1 to Form 1120 (the S-corp tax return). Plan compensation is not only used to determine the contribution credit but also the maximum tax deduction. If W-2 pay is kept low, then even if the contribution credit is defined as a flat dollar amount the deductible contribution is limited.

Let’s assume that in Robert’s case we used W-2 compensation of $150,000 in our projections. Also assume that his actual pay come the end of the year is comprised of $60,000 in W-2 and $90,000 in S-corp distributions. If the contribution credit was set at a flat $100,000, then the benefit earned would exceed the maximum allowed since the plan can only count the W-2 amount of $60,000, which is not a good a thing. Defining the contribution credit as $100,000 or 66.67% of plan compensation, if lower, avoids that problem but results in a contribution of only $40,000, which is significantly less than Robert was expecting. So, the bottom line is to make sure W-2 compensation is reported if the plan sponsor is a corporation.

Side note: The maximum benefit for defined benefit plans is based on a high three-year average over the participant’s working lifetime. As a result, there may be situations where the three-year average used to justify the contribution credit is based on compensation prior to the establishment of the plan. For example, maybe Robert earned $150,000 per year from 2017-2019, but then decreased his W-2 to $60,000 in 2020. The formula for the contribution credit could be written as a flat $100,000 or $100,000 with a maximum of 166.67% of current plan compensation. Yes, the formula can be for more than 100% of plan compensation!

There is no hard and fast rule the IRS follows regarding how often cash balance contribution formulas can be changed. However, the rule of thumb is no more than once every 3 to 5 years. As we mentioned earlier, the benefit must be definitely determinable. If a pattern of frequent amendments effectively makes the contribution credits discretionary, the plan could be considered a profit sharing plan with allocations above the maximum limits – in other words, really bad stuff.

Robert is willing to commit to a $100,000 contribution for the next 3 to 5 years. His current comfortable level is $135,000 per year, but the discretionary nature of the contributions to the 401(k) plan means he is still only truly committing to $100,000. If, in year two or three, Robert has a temporary blip in income (or simply wants to reduce his contributions), and does not want a lower W-2, he can just forgo some or all of his employee deferrals and/or not make a profit sharing contribution.

Want a printable version of this article to take with you? Click here.

If a defined benefit plan makes sense for your company, DWC can work with you to design a plan that accomplishes your objectives while maintaining maximum flexibility. Contact us today to get started.