Forfeiture Account Gathering Dust? We’ve got a fix for that!

With all the responsibilities that come with being a plan sponsor, not to mention a business owner, your plan’s forfeiture account probably doesn’t make it anywhere near the top of the priority list.  More than likely, forfeitures are allocated to the account automatically by your plan’s recordkeeper following a participant distribution.  Then, your plan consultant provides you an annual update of the value of the account when delivering your compliance testing, plan reconciliations, and Form 5500 after year-end.  The forfeiture account is just sitting pretty with minimal earnings, readily available for a rainy day.  No problem, right?

Knowing this article is all about corrections, you can probably guess where we’re going here.  A forfeiture account “gathering dust” year after year is a problem.  Somewhere in your plan’s document there is language that specifies exactly how and when the dollars in that account must be used.  The “when” is either the year in which the forfeiture occurs or the immediately subsequent year.  The “how” is usually one or a combination of the following:

Failure to timely utilize the forfeiture account according to the legal plan document is an operational failure.  Moreover, its also the kind of failure that is getting increasing attention from the Internal Revenue Service.

So now what?  Your plan’s rainy-day fund just became a source of stress.  Can you simply allocate the balance of the account now and start “clean” going forward?  If only it were that easy.  Let’s look at an example, the options for correction, and the steps to get the plan back on track.  Take a deep breath, we have approved methods available under the Self-Correction Program (SCP) and options under the Voluntary Correction Program (VCP) using the IRS’ Employee Plans Compliance Resolution System (EPCRS)! (What’s the difference between SCP and VCP?  Click here. And how do you navigate this alphabet soup? We’ve got you covered here.)

Thinking your plan might have some “dusty” forfeitures and wondering how they got there?  Here’s a snippet to explain.

Float Your Boat sponsors a 401(k) Plan.  Here’s what you need to know about this plan:

The Plan currently has a forfeiture account balance of $10,000.  Taking a look at the history, the timing of forfeitures is as follows:

The plan’s new consultant discovers this account balance, and related history, during preparation of the 2018 compliance work in early 2019.  Noting the details above, the consultant reaches out to the plan sponsor to discuss the errors and necessary corrections in greater detail.

While the accumulating forfeitures may seem like a relatively benign error (after all, the money is still in the plan), there are actually issues to address on a few fronts.  As noted above, the first is the failure to follow the terms of the legal plan document.  This alone creates an operational error that requires a fix.  The second?  If you take a look at the plan document, these forfeitures are actually benefits due to plan participants for years 2014 – 2018…benefits that have not been timely allocated them.

Interested in a few more details on timely use of plan forfeitures?  We’ve got you covered right here, complete with some citations to the applicable rules, if you’re in to that sort of thing. 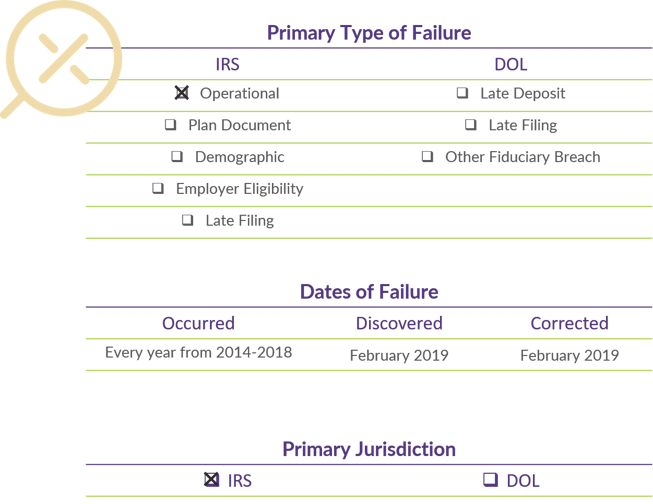 Tell us if you’ve heard this one before - the gist of the correction process is to put the plan, and its participants, back in the position they would have been in had the error not occurred.  What does that mean in this case?  The sponsor needs to allocate the forfeitures to plan participants as though those allocations had occurred at the end of each year along the way.  Sounds easy enough, right?

Let’s assume Float Your Boat has ready access to the historical employee census information needed – compensation, hours worked, hire dates, termination dates, etc. for each year covered by the failure (back to 2014, in this case).  With this information in hand, we’ll now allocate the forfeitures starting with 2014.

Not so bad!  So now, let’s allocate the 2015 forfeitures in the same fashion.

This same methodology is used for each plan year until all forfeitures are allocated.  If any of these participants do not have plan accounts, the recordkeeper must establish accounts for them so that the allocations can occur.

Because we’re not having enough fun already, let’s throw in a monkey wrench that actually isn’t all that unusual in a real-world scenario.  Let’s say the Chef, who received an allocation of $142.86 for 2014, terminated in 2015 and took a distribution immediately thereafter.  And, let’s assume, the Chef was only 60% vested at the time of termination.  This means of the $142.86 that we just allocated for 2014, $85.72 needs to be distributed to this long gone participant and $57.14 now needs to be added to the forfeiture account for 2015.  And, if you guessed this means our 2015 allocation now becomes $2,057.14 and requires re-work, you are 100% correct.

This cascading effect applies throughout all the years being corrected.  In addition to completing subsequent distributions for terminated participants during these plan years (the relatively easy part), the unvested portions of these forfeiture reallocations must be calculated, re-forfeited for the proper year, and then re-reallocated to the remaining participants for the applicable plan year.  This overlapping effect adds an element of complexity to what initially begins as an easy calculation.  We know, head = spinning.

It’s fair to say that if forfeitures have accumulated for a number of years, historical census information might not be available.  There are also situations where the amount of forfeitures to be allocated and/or the number of participants involved would result in the allocation of very small amounts, sometimes to participants who have long since terminated employment.  The “good” news is that the IRS correction program does permit outside the box corrections when the facts and circumstances warrant.  It is important to note that the IRS generally wants to see compelling facts to justify such a correction.  For example, it is not enough to say that a company just didn’t feel like looking for historical census.

We encountered one situation in which the accumulated forfeitures came to be in a plan due to the sponsor having acquired another company and merged the acquired plan into its plan.  The acquired company had, in turn, come to hold some of its forfeitures from a previous acquisition it had made.  When putting it all together, the total forfeitures were close to $100,000, but involved thousands of participants over at least 10 years and multiple acquisitions.

Between the impossibility of piecing together detailed employee records and the fact that many participants were going to likely end up with tiny allocations, we proposed a streamlined correction to the IRS.  The proposed correction was basically to allocate all forfeitures on a per capita basis, i.e. each person gets the same dollar amount, to each non-highly compensated employee who was actively employed at the time of correction.  Given the unique fact pattern, the IRS approved the proposed correction.  Going back to our friends at Float Your Boat, however, it is questionable whether such an alternative would be approved given the relatively straight-forward nature of their situation.

With or Without IRS Approval

If caught and corrected within two years, this type of failure can generally be self-corrected without a formal submission for the IRS to approve it.  However, that typically only applies when correcting by the book.  The more outside of the box the correction is, the more important it is to ask the IRS to approve it.  The above example involving the acquisitions is a case-in-point.  It would be a bummer to go through the effort to correct only to have the IRS disallow it for having pushed the boundaries too far.

Determining significance of a forfeiture failure can be a bit more tricky than other types of failures.  The reason is that although the dollar amounts involved are usually fairly small, relative to the overall assets in the plan, such failures usually impact almost all of the plan’s active participants.  And with the cascading effect described above, even a year or two of accumulated forfeitures can impact more than just those couple of years.  Add all that together, and the determination often comes down to a given plan sponsor’s risk tolerance.  The conservative approach is to err on the side of significance and submit to the IRS for approval.

The moral of this story won’t surprise you – the sooner this type of error is identified and corrected, the easier it is to correct.  Establishing best practices that include annual (or more frequent) review and timely utilization of the forfeiture account (based on your Plan’s document) is key.  Where you can avoid gathering ancient payroll records and the mind-spinning cascading calculations of forfeitures, the better off you are!  And where you can avoid the need for the VCP submission, even better.

All that said, bad things can happen to good plans.  So whether it’s preventative or prescriptive, DWC is ready to assist. For more information on our VCP services, click here.

Want to take this article with you? Click here for a printable PDF.