Your Safe Harbor Actually Isn't? We've Got a Fix for That!

We’ve been through a few Corrections of the Quarter together now, and we appreciate you being along for the ride.  We feel this is pretty good stuff but, at the heart of it all, we’re pension geeks (no point in hiding it).  And while the rules and regulations get us going, we have a geeky passion for the opportunity to find creative solutions.

Don’t let the word “creative” throw you.  When working with a correction, we hold true to the premise of finding a way to put the plan (and participants!) back to the place they would have been had the error never occurred.  We approach any correction project with this tenet front of mind.  This quarter though, we want to walk through a correction that doesn’t neatly follow one of the preset fixes but rather highlights how the IRS is willing to accept out of the box solutions.

Vacation Station sponsors a 401(k) plan for the two owners and ten employees.  A few important plan details to keep in mind as we explore this case:

When we were engaged for the 2018 compliance work, we asked for copies of the previous years’ testing and noticed a big problem.  While VS had dutifully and consistently made the 3% “safe harbor” contributions to eligible participants, the plan document actually did not include any safe harbor provisions!  Since a 401(k) plan cannot retroactively be turned into a safe harbor, they definitely had a problem.

To get the train back on the tracks, our first step was to complete the non-discrimination testing for each of those previous plan years (2015, 2016, and 2017) to determine the true scope of the issue.  Now if this was a child’s book, things would have worked out perfectly; but this is the Correction of the Quarter, so you know there are more twists and turns coming before we get to a happily ever after.  First things first, we’ve got to tackle the ADP Non-Discrimination testing for 2015, 2016, and 2017.  Need a refresher on ADP Testing; we’ve got you covered here. 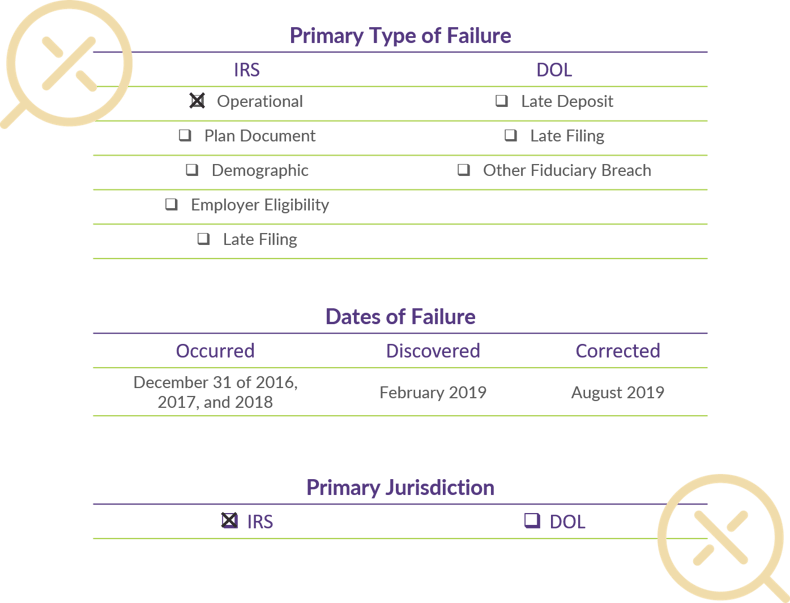 Let’s take a look at the prior years’ testing results:

Since the HCEs are limited to an average deferral rate that is within two percentage points of the NHCEs’ average, the plan fails the ADP test for all three years listed above.

The regulatory deadline to correct a failed ADP test is the last day of the year following the year of the failure.  We are clearly outside that window for all three years.  Don’t worry though, the IRS (more specifically Revenue Procedure 2019-19 for those who love a good citation) provides detailed guidance on two pre-approved methods for correcting just such a problem:

Method 2 – One to One Method

Note that there are a number of potential testing variables, but we are focusing on the key points here.

Doing some quick “back of the envelope” calculations, the QNEC percentages for each year are as follows:

Translating that into practical application, let’s look at the options for correction of the 2015 plan year as a snapshot.

Utilizing Method 2, Vacation Station must make a QNEC contribution of $10,333.00 and distribute $10,333.00 in total from the HCEs’ accounts (and adjust for earnings as applicable), just to correct the 2015 plan year.

These are expensive and particularly undesirable options for Vacation Station.  Not to mention that in addition to the costs associated with these corrections, Vacation Station has already made what they thought was a safe harbor contribution to the NHCEs to the tune of $15,800 and a profit sharing contribution of $47,400.  That’s all money that was 100% vested upon deposit.  The idea of depositing more to the plan now that this error has been discovered is gut-wrenching.  Triple the cost since the error occurred over three separate years, and this gets pricey quickly!

Our goal is to help a client bring their plan back into compliance as simply as possible, but sometimes a seemingly straightforward correction can offer up a curveball.  Also, the path of least resistance can sometimes be more expensive.  Before proceeding with the corrections using one of the pre-approved methods described above, we had several detailed conversations with Vacation Station to explore other potential solutions.  With the sponsor’s blessing, we decided to try an alternative.

A quick note on alternative solutions: if you’re going to propose a solution to the IRS, especially when they’ve already “suggested” one, you’d better make it good.  What do we mean by that?  The solution you propose needs to be one you can defend, straight-faced, to an IRS agent.  One you can proclaim, in good faith, protects the well-being of the participants and the integrity of the plan; this is not a place to try to be sneaky, deceptive, or cute (checkout Circular 230 if you’d like more on this).

Here is what we came up with.  The first part doesn’t really push any limits.  Since QNECs can be used to correct failed ADP tests, we started by applying the 3% QNEC that VS already made.  It might not have truly been a safe harbor contribution, but it was still a QNEC.  That closed the 4.86% gap for 2015 to only 1.86% (4.86% spread – 3% QNEC).  Again, not terribly imaginative, but it was a way to greatly reduce the costs of corrections.  Then the geek in us took over, and we started looking for ways to improve it even further.

Two of the key characteristics that make QNECs unique are that they must be immediately vested, and they are subject to restrictions on certain in-service distributions.  For Vacation Station, the profit sharing money type was already immediately vested, so that checked the first QNEC box.  We were able to confirm that none of the profit sharing dollars had been paid out as either hardship distributions or pre-59 ½ in-service withdrawals.  Box number 2, check!

So, here’s where we got a little creative! (Thanks for sticking with us to this point.)  We proposed to the IRS to allow VS to recategorize enough of the discretionary profit sharing contributions as needed to correct the failed ADP test.  After applying the true 3% QNEC, we had to close the remaining gap of 1.86% for 2015.  That meant decreasing the profit sharing contribution by that much and increasing the QNEC – basically a recordkeeping adjustment.  Here is the before and after:

And, I promise, we did this with a straight face.  This absence of distributions is a key component to making this proposal for recategorization.

We re-ran the corrections for each plan year utilizing Method 1 above - utilizing the “safe harbor” dollars as a QNEC and recategorizing the profit sharing contributions as a QNEC - as much as necessary to correct testing each year.  This allowed Vacation Station to make full correction without having to contribute a single additional penny to the plan or refund anything to any of the HCEs.

With VS’ approval, we submitted the above corrections to the IRS for review under VCP, and they approved them!

VCP is available so that sponsors can voluntarily take the necessary steps to bring their plans into compliance.  Realistically, if a plan gets to the stage of disqualification then no one wins.  The IRS would much prefer the preservation of a plan and participants’ retirement benefits than they would see the wheels come off.  However, just because this program is voluntary and intended to have some flexibility built in, doesn’t mean you can proceed without the appropriate measures of caution.

As mentioned before, you should not prepare and submit a correction method that you aren’t willing to stand behind if called in front of the IRS.  You’re submitting the VCP application directly to the IRS, so this one might seem obvious but there’s more to consider.  For starters, a plan sponsor must sign the VCP application under penalty of perjury.  That means knowingly submitting false information is a very bad thing.  Secondly, when you submit the VCP application to the IRS you are outlining the errors and including all the applicable contact information for those responsible for the plan.  If the IRS decides not to accept your proposed correction method, they know of the error and exactly where to follow-up.

When submitting a creative solution for approval, it’s important to be prepared for the possibility that the IRS could reject the correction and have plan B ready to go.  This may be falling back to a pre-approved correction method or at least something that is a bit closer to it.  That allows for a quick response if things do not go as preferred the first time around.

One last thought…if you’re looking to propose a really “inventive” correction and you have concerns that 1) the IRS is likely to shutdown that proposal and 2) the sponsor is unable/unwilling to correct “by-the-book,” the IRS does permit anonymous VCP submissions.  While the anonymous submission protects the identity of the sponsor, the trade-off is losing the audit protection that comes while a typical VCP submission is being considered.  This is one of those areas where it’s important to make sure everyone involved – particularly the plan sponsor - understands the pros and cons in order to make a prudent decision regarding what’s best for the plan and participants.

So, is it worth a little risk?  It can be!  It’s just important to consider the strength of your proposal and accept that at the end of the day you might have to go back to a pre-approved option.  While every situation is a little bit different, there are certain types of corrections for which we’ve seen success time and again.  If you have a correction pending and need to explore some creative solutions, let us know.  We’d love to roll-up our sleeves, grab our proverbial pocket protector, and apply our experiences to the benefit of your plan.

Want to take this article with you? Click here for the printable PDF.