Retroactively Decided Not to Make Safe Harbor Contributions for Your HCEs? We've Got a Fix (or Two) for That!

If you’ve been with us for a while you’ve heard us say a few things time and again.  First, the rules and regulatory agencies do not allow plans to disproportionately favor highly compensated employees (HCEs) relative to the non-HCEs.  Second, a plan sponsor must be very careful about how and when it implements or removes benefits from the plan.  So-called anti-cutback rules prohibit sponsors from removing or reducing benefits that participants have already accrued, a rule that applies to HCEs and non-HCEs alike.

So, where is all this going?  In this Correction of the Quarter, we’ll take a look at what happens when there’s a clash between these two concepts and which golden rule wins out.

Joe and Carole own Cats ‘R Us (CRU).  Joe owns 94%, and Carole is a minority owner with the remaining 6%.  CRU sponsors the CRU 401(k) Plan that provides a 3% safe harbor non-elective contribution on an annual basis.

The plan was effective in January 2015, and CRU provided the safe harbor contribution to all eligible participants, as defined in the plan document, for 2015.  In 2016, there was a swift decrease in tourist traffic to CRU, causing the company to face some extreme financial difficulties.  In an effort to take care of their employees, Joe and Carole fully funded the safe harbor for all eligible non-HCEs but opted not to fund the contribution for themselves.

Interest in big cats has continued to wane, and this is evident when you look at CRU’s books.  To compensate, Joe and Carole have continued funding the required safe harbor for only the non-HCEs for the 2017, 2018, and 2019 plan years.

Here is a quick recap of the safe harbor funding for each plan year: 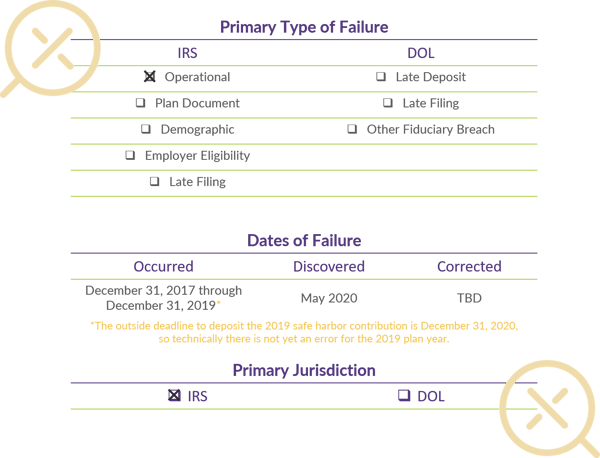 CRU has failed to follow the terms of the plan document and as a result now has an operational failure.  The plan document states that all employees who satisfy the eligibility and entry requirements are to receive the 3% safe harbor non-elective contribution.  Although Joe and Carole are both HCEs (as well as key employees) who could be excluded from safe harbor contributions, the plan document must specifically provide for their exclusion.  Since the current document does not exclude them, the company is required to fund the contribution for them the same as any other eligible participant.

Perhaps unsurprisingly, to correct this failure, the affected participants need to be made whole.  This means providing both Joe and Carole with the safe harbor non-elective contributions equal to 3% of their compensation for 2016 through 2019 and adjusting this contribution for any gains that would have accrued over this period, based on the rate of return of their plan accounts.

What if CRU doesn’t have the funds available to make the “simple” correction?  Are there any options or reprieve available when it comes to contributions for HCEs and key employees?  Can’t they just retroactively amend their plan to eliminate the contribution requirement for themselves?  They can “discriminate” against themselves, right?  Short answer(s) – not officially.

The IRS correction program (called the Employee Plans Compliance Resolution System or EPCRS) provides guidance for plan sponsors to correct various plan errors through both the self-correction program or SCP (no formal IRS approval required) as well as the voluntary correction program or VCP (required formal application and IRS approval).  While the latest EPCRS update (published in 2019) does expand the availability of retroactive plan amendments as a self-correction option, it explicitly states that these types of amendments must expand, rather than reduce, benefits.  So where does this leave our cat friends?

There are a few possibilities to explore.  The anti-cutback rules we mentioned earlier were put in place to help protect participants who might not otherwise have recourse against an employer who tried to take back benefits that were already earned.  The argument here could be made that since both Joe and Carole are owners, they are the employer and do not need protection from themselves.  As such, they should be able to collectively/voluntarily make the shared business decision to retroactively amend the plan to exclude themselves from the safe harbor non-elective contributions.

That is certainly one option; however, since the amendment is decreasing benefits, it would require submission to the IRS for approval under VCP rather than the more streamlined and cost-effective SCP.  With that said, we have seen the IRS accept this type of proposed correction in the past, particularly in situations involving the plan sponsor’s financial hardship.  However, if we change the fact pattern so that Carole is a non-owner HCE, the IRS is not likely to accept the retroactive amendment in such a scenario.  Although a plan cannot discriminate in favor of HCEs, non-owner HCEs are still entitled to protection via the anti-cutback rule with regard to benefits they’ve already accrued.

In our case, things fall somewhere in the middle of the retroactive amendment continuum.  We have one owner with 94% ownership and another with only 6%.  Though both are owners, it’s not a stretch that the IRS could conclude that the minority owner didn’t really have a practical say in how the majority owner administered the plan and that Joe dictated the decision to Carole, leaving her “unprotected” with regard to her safe harbor contributions.  This scenario more closely mirrors a non-owner HCE’s influence, making it less likely the IRS would approve the retroactive amendment.  After all that, trying to determine your path forward may feel like the cat’s got your tongue.

CRU must make the business decision about how to proceed with correction.  The first, sanctioned, correction method is to make participant accounts whole for these missed contributions.  The second, very risky, alternative is to retroactively amend the plan to exclude owners from receiving the safe harbor contribution.

SCP: If taking the “by the book” correction approach, the self-correction option may be available.  Depending on the significance of the failure and the timing of correction relative to the failure, CRU may be able to deposit the required contributions for Joe and Carole and call it a wrap with this failure without any formal submission for IRS approval.

VCP: If instead, CRU decides to go the retroactive amendment route, the only option is submission to the IRS under VCP since retro amendments that reduce benefits are still not eligible for SCP.

We understand that the decision CRU faces isn’t necessarily as cut and dried as it appears on paper.  While it can be easy to explain what the correction should be based on IRS revenue procedures, that doesn’t mean the decision is an easy one for the plan sponsors involved.  It’s quite likely that the failure to deposit safe harbor contributions for Joe and Carole was a decision based on financial necessity rather than blatant disregard for the rules.  And in that case, what’s the best (i.e. most affordable) option to correct?

In some cases, the option to fully fund participant accounts may be financially daunting.  Depending on how many years, the number of HCEs, gains, and any other variables, the amount due to participant accounts could far exceed anything the plan sponsor can reasonably afford to fund.  Additionally, if the failure is considered significant, this “by the book” correction method may still require a submission to the IRS and all the related fees for this process.

On the other hand, choosing to submit under VCP with a retroactive amendment has a much lower probability of success.  The IRS is very reluctant to approve any correction that involves reducing a benefit for a plan participant, even if the participant is an HCE.  Granted, a submission that includes an explanation of the financial factors involved paired with documentation of the full funding for all non-HCEs/non-owners could win an approval.  The challenge here is that no practitioner can guarantee favorable results in this situation, so this could easily be a place where Joe and Carole spend the time and money on VCP only to end up where they started (having to make the safe harbor contributions for themselves).  We don’t want you to feel like you’re chasing your tail with this process!

Whether reviewing the situation to determine significance or debating the idea of a retroactive amendment, it’s important to take a high-level look at all relevant factors through the lens of an IRS agent.  Documentation of the relevant factors, decisions made, and verification of any actions taken will be beneficial to making your case and explaining the correction path you ultimately elect.

At the same time as you review and debate corrections for prior plan years, this is an opportune time to consider the current and future plan years as well.  If challenges from prior plan years are carrying over into the present, it’s time to review your plan document to identify ways to improve your plan design to better meet your current needs.  At a minimum, Joe and Carole can amend the CRU plan now to exclude themselves from future safe harbor contributions until the business has landed back on all four feet.

Navigating plan compliance issues can make you feel like a caged tiger, especially when you add financial strain to the mix.  If you’ve run into a situation like this, we’re happy to discuss your specific situation and brainstorm correction options.  If you find that your normal level of employer contributions is going to be unattainable this year or next, it’s a great time to take a look at overall plan design.  Whether contributions are discretionary or fixed, looking at designs and plan documents now can help ensure you stay ahead of any potential plan failures and additional costs.  Your DWC team is here to help you get a handle on the situation and turn that tiger into a purring kitten.  If you’d like to review plan design, plan documents, or potential corrections, don’t hesitate to reach out to us!

For more information on our SCP and VCP services, click here.