When More (Plans) Isn't Merrier: We've Got a Fix for That!

Stop us if you’ve heard this one before – a SEP, a SIMPLE, and a 401(k) walk into a bar…unfortunately, there’s not a great punch line at the end of this one.  Instead of some good laughs, this situation is a recipe for some issues in need of attention.  While it might be unusual for a single company to establish one of each, it is not nearly as far-fetched to discover that related companies may have setup separate types of plans for their respective employees, one with a SEP or SIMPLE and another with a 401(k) plan.  This isn’t necessarily a problem with respect to the 401(k) plan, but the SEP and SIMPLE rules restrict how those types of plans can co-exist with others.

Our previous Corrections of the Quarter may have given the impression that all plan errors require a major overhaul that translates into lots of time and expense.  The truth is that not every correction is so complex; sometimes getting your plan back on track can be simple (see what we did there?).  In the chaos of the holiday season, we thought having a correction that is a bit easier would be good to throw into the mix.  On that note, given the proclivity for SEP and SIMPLE snafus, we thought this might be a “fun” Correction of the Quarter.

When providing year-end information to its TPA, Celebration Wholesale never mentioned anything about Holiday Festivus and never included any of those employees on the census.  All of the information provided reflected only CW.  We first learned of HF’s existence in January 2019 when a new contact at CW provided the 2018 year-end information.  Since the controlled group rules require related companies to be treated as a single employer for retirement plan purposes, we grew concerned that those jingle bells were really alarm bells.

To make matters even more interesting, we discovered that not only has CW never included the HF employees on its census, but also HF has had a SIMPLE IRA in place since 2016.  Now, we’re starting to feel like we’ve had a little too much eggnog. 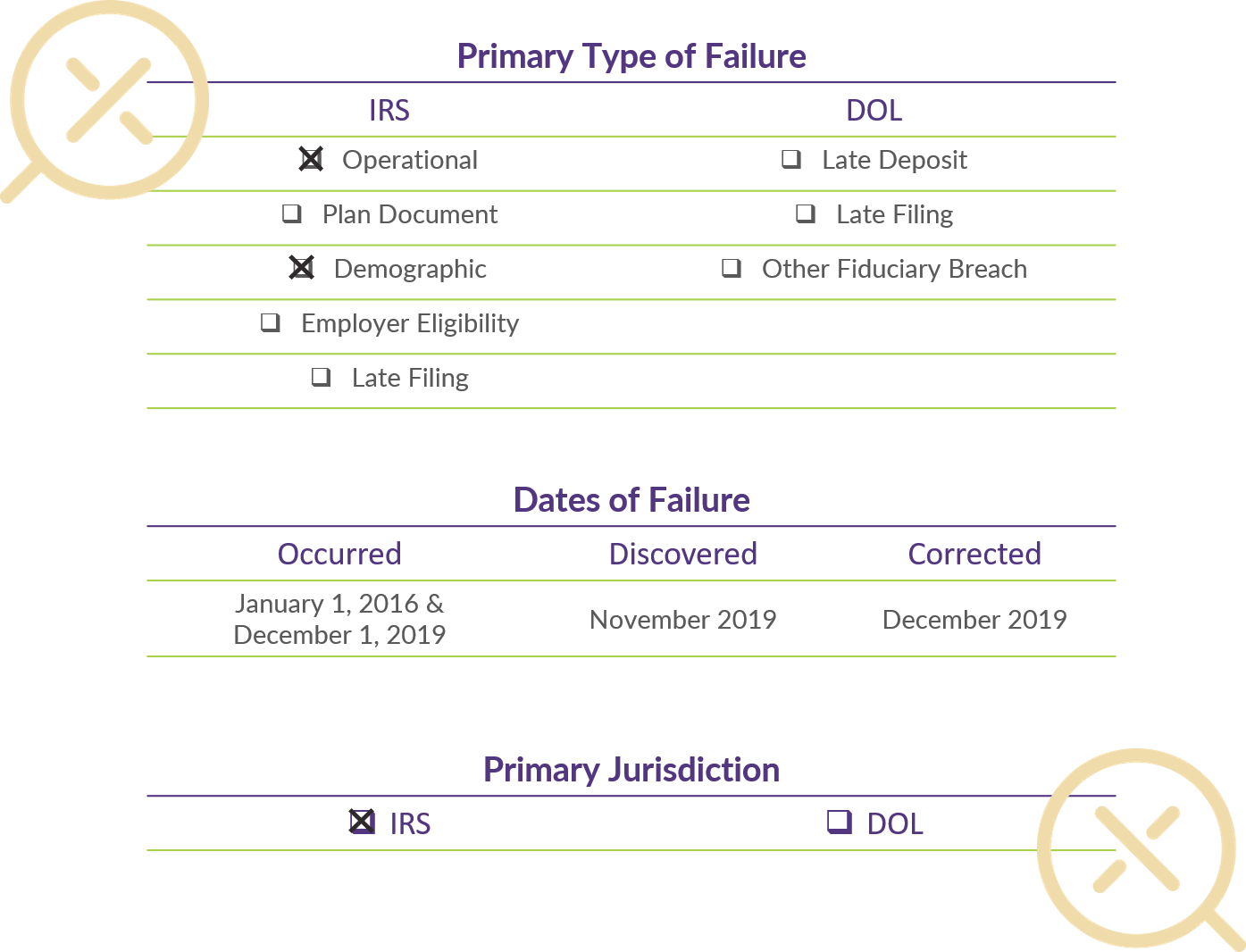 Let’s unwrap these presents one by one:

We have 75% of the HCEs (3 of 4) benefitting in the CW plan and 60% (15 out of 25) of the non-HCEs.  That gives us a coverage ratio of 80% (60% x 75%).  Since that exceeds our magic number, the CW plan passes the minimum coverage test, which means this particular failure is not a failure after all.  With that said, it is important to go through the process of testing each year involved to ensure a passing result.  If the test does not pass for any of the years in question, additional corrections are required.

One of the primary requirements of a SIMPLE IRA is that it be the exclusive plan sponsored by an employer.  Surprise!  Since Celebration Wholesale and Holiday Festivus are considered a single employer due to their controlled group status, the existence of the CW 401(k) Plan means that HF’s SIMPLE is not the exclusive plan in this mix.  That is a problem that could jeopardize the preferential tax status of all the money in the plan, even worse than getting that holiday fruitcake.

As a general rule, SIMPLE plans must cover all employees who earned more than $5,000 in compensation in the previous two years or who are reasonably expected to earn at least $5,000 in the current year.  That means that many of the CW employees were eligible for the HF SIMPLE even though they were also eligible for their own 401(k) plan.  Since SIMPLE IRAs have a mandatory company contribution (either match or nonelective), any CW employees who met the SIMPLE eligibility requirements missed out on that required company contribution.

The good news is that because the CW 401(k) Plan passes the minimum coverage test even when considering those HF employees who don’t receive benefits there, no corrections are required for that plan.  Had the test failed, corrective actions might include retroactive plan amendments and additional company contributions to HF employees.  But, since we do not have to worry about that in this case, we won’t make you sit through any more details on it.

Although the news here is not quite as good as avoiding corrections altogether, correcting the violation of the exclusive plan rule is, well, simple.  The very first step is for HF to discontinue all contributions (employee deferrals as well as company contributions) to the SIMPLE IRA immediately; no need to compound the problem!  See! Simple!

The IRS correction program includes a component that does not require formal approval (called the Self Correction Program or SCP) and a component that does require a formal application for approval (called the Voluntary Correction Program or VCP).  Since violations of the exclusive plan rule are not eligible for SCP, we worked with HF to prepare a VCP application to get the IRS to bless the correction, allowing all the contributions to remain in the plan and maintain their tax-deferred status.  The IRS even has a streamlined form just for this type of correction.

Our experience is the IRS is typically pretty agreeable when it comes to good-faith corrections for SIMPLE plans.  In this instance, the CW employees who met the eligibility requirements for the HF SIMPLE plan received company contributions in the CW 401(k) Plan that were equal to or greater what they would have received in the SIMPLE.  As a result, the IRS was willing to forego any requirement to make corrective contributions.  Insert deep breath here!

Let’s caveat this – this is pension geek kind of fun.  What if, just for kicks, there was a third entity that was part of the controlled group, Thanksgiving Thrift.  And, to make it interesting, Thanksgiving Thrift sponsored a SEP for its employees.  What could this mean for CW and HF?

Similar to the situation outlined above, the CW 401(k) Plan would have to confirm that it still passed the coverage test when factoring in the non-benefitting TT employees.  The more interesting question is what to do with the SEP.  While there is no absolute exclusive plan rule that applies to SEPs, a company that establishes one using the streamlined IRS Form 5305-SEP is precluded from offering any other type of plan (i.e. other SEPs are fine, 401(k) plans are not).  If this is the case, an additional VCP correction is likely necessary.

If you think the plight of Thanksgiving Thrift’s SEP is more exhausting than tryptophan, you’re probably right.  We’ll save a deeper dive into this scenario for another article!

SEPs and SIMPLEs alike can be quick and easy to set-up.  After all, the “S” in SEP stands for “Simplified” and, well, SIMPLE.  Don’t let that fool you into thinking the rules are any less stringent.  Given the “do it yourself” nature of both of those types of plans, we run into more errors and corrections than you might anticipate for plans that are supposed to be “simple” to maintain.  When you’re deciding on the best type of plan for your company, there’s a lot to consider.  While we’re always happy to have that conversation with you, we know it can be nice to have some preliminary information to digest.  If you’re navigating that path, you might find this information on plan types and plan design helpful.

When you have a major business transaction, whether merger, acquisition, or significant change in employee count, it’s important to review your current plan design.  If you suddenly outgrow the SIMPLE or you sponsor a 401(k) plan and merge with an entity offering a SIMPLE, there’s action required but a grace period to embrace.  If the suspense is getting to you, you can find out about both these scenarios here and here.

We’re hoping you found this Correction of the Quarter (COTQ) easy to navigate, or at least easier to navigate than politics over the Thanksgiving table.  The errors laid out in this COTQ are some of those plan errors that make us grateful for the IRS correction programs all year long.

If the idea of working through the SEP, SIMPLE, and 401(k) plan challenge makes you want to say bah humbug, we get it. You can tell from the correction above that any little change in details can have an enormous impact on the potential scope of the error and the fix.  With that in mind, if you find yourself trying to make sense of it all, don’t go it alone.  The DWC team would be happy to make your season brighter and offer our support for your plan needs.

Want to take this article with you? Click here for the printable PDF.