Your Definition of Compensation Isn't in the ERISA Dictionary? We've Got a Fix for That.

Getting creative with the plan’s definition of compensation can be an effective way to target benefits, budget your benefit dollars, and maintain consistent benefit levels from year to year. However, with that creativity comes added layers of testing and compliance to concern yourself with. And, if you sponsor a safe harbor plan, those rules can bring on more complexity in administration and potential correction.

So, what happens when the plan’s definition of compensation fails to satisfy the nondiscrimination rules? We’ll explore that scenario and a few others below in this Correction of the Quarter. Fun, fun, fun!

The Surf Company sponsors a safe harbor 401(k) plan that provides a 3% of pay nonelective contribution to all participants.

When establishing the plan, Surf Company wanted plan benefits to be based on base salaries and not on any forms of irregular pay such as bonus, commission, or tenure awards. The idea here is that using base salary for retirement plan purposes would allow Surf to better estimate annual contribution costs and avoid significant increases in years when they were also paying higher bonuses or commissions. Wouldn’t it be nice if this was smooth and easy for the sponsor?

In 2019, the first year of the plan, there are a total of five eligible participants, one of whom (Brian) is a highly compensated employee.

In this scenario, the plan includes 95% of the HCE’s compensation and only 88% of the NHCEs’ compensation. 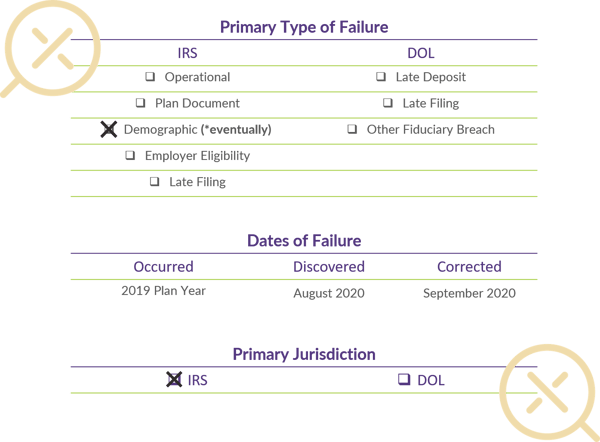 There is no bright line test, but the IRS has stated that the percentage of compensation includible for the HCEs cannot exceed the NHCE percentage by more than a “de minimus” amount. What exactly does that mean? In practice, this has typically meant the difference between the two cannot exceed three percentage points (in favor of the HCEs). That said, it’s important to look at the reasonableness of the exclusions and proceed conservatively when it comes to the compensation ratio test since there are no set standards on which to rely. With Surf Company, the sole HCE has 95% of his compensation included compared 88% for the NHCEs. At a seven-percentage-point spread, the plan fails the compensation ratio test for 2019. Don’t worry baby, there are correction options available, and we’ll walk through them together.

Although there is more flexibility in defining the compensation from which participants can defer, the definition of compensation used for calculating safe harbor contributions must satisfy the compensation ratio test. That means Surf must amend its plan, retroactive to January 1, 2019, to include sufficient compensation in order to narrow that seven-point gap.

How do we go about that? We’ll review the types of compensation currently excluded and look for the least possible amounts the Plan must add back to satisfy nondiscrimination testing.

First, let’s take a look at including tenure awards and excluding all other non-base pay:

By including the tenure award, average NHCE compensation increases to 89%, still a 6-point spread.

Let’s take a different approach…with commissions included and all other forms of non-base pay excluded:

So, you amend the plan and update the definition of compensation and that’s it? Unfortunately, you’re California dreamin’ if that’s what you think. After you’ve amended the definition of compensation, its necessary to recalculate the safe harbor nonelective to provide the 3% safe harbor contribution on the $21,000 in commission that has been added back (an additional $630 in this case).

Now for an explanation of why we said before that this is “eventually” a demographic failure. The various nondiscrimination tests are based on actual plan activity that varies from year to year. Because of that, the rules contemplate that sometimes, a plan will fail a test and build in time frames for companies to timely fix it. It’s only if a plan sponsor delays the fix beyond those built-in correction windows that correction must shift to use of the IRS’ formal correction program. A more common example is when a plan fails the ADP test and has until the end of the following years to correct.

The compensation ratio test is no different. It can be corrected by a special type of amendment used to address certain nondiscrimination failures as long as it is adopted no later than 9 ½ months following the close of the year. For a calendar year plan, that translates to October 15th of the following year. And, the additional safe harbor contributions must be deposited no later than December 31st - the same deadline that normally applies to safe harbor contributions.

Keeping the good vibrations going, this means that if Surf is timely with its correction (by October 15, 2020), what we described above is it. There are no other steps to take and no special forms to file.

If, on the other hand, Surf delays beyond October 15th, things become more serious. The reason is that the Employee Plans Compliance Resolution System (EPCRS, the IRS correction program) generally provides that a nondiscrimination failure that is not timely corrected is what is referred to as a demographic failure. The catch is that correcting a demographic failure requires applying to the IRS for approval. That takes place under the Voluntary Correction Program (VCP) component of EPCRS.

As with most plan corrections, the sooner the plan sponsor corrects the failure, the less expense and hassle is associated with bringing the plan back into compliance. Failed compensation ratio testing and amended definitions of compensation are no exception!

When looking at plan design, specifically the options around defining compensation, it’s important to really dive into the details. Taking a look at what kinds of compensation participants earn and which groups of participants (HCE versus NHCE) earn them can help reduce the likelihood of failed testing and the subsequent corrections. Just because the plan document can be drafted to exclude all sorts of compensation doesn’t mean it will work well for your plan.

Even with the best planning, there are some years that can throw you for a loop. Participants may shift from HCE to non-HCE (and vice versa), changing the demographic composition of your testing groups. Or, in a year when finances are tight and staffing is short, maybe bonuses to HCEs decrease while overtime pay for non-HCEs increases.

While it’s impossible to design your plan to take into account every possible scenario, it’s a good idea to think through the design to ensure it makes sense with your “usual” compensation arrangement. From there, it is important to be aware of demographic and financial changes within your company and work with your plan consultant to assess the impact those changes might have on the plan. If it looks like a compensation ratio test wipe out might be on the horizon, amending the plan’s definition of compensation before the year ends will typically result in a less expensive correction overall.

If carving out certain types of compensation doesn’t appear to work, there may be other options such as using the top paid group election to shift more employees to the non-HCE group, which may improve the test results. There isn’t a one-size-fits-all solution, but there are a number of provisions/options that can be combined to customize your plan design to meet your goals and desired benefit levels.

Working through plan corrections may be less fun, fun, fun than daydreaming about Kokomo, but our goal at DWC is to make the process as easy as possible for you. We also love the opportunity to game plan with you in advance to help reduce the chances the plan needs corrections on a go forward basis. If you’re running into a situation where the plan’s compensation ratio or other nondiscrimination testing is routinely challenged, we’d be happy to discuss your specific situation. Your DWC team is here to help you get a handle on the situation so that your plan makes you want to dance, dance, dance. If you’d like to review plan design, plan documents, or potential corrections, don’t hesitate to reach out to us. Cowabunga!

For more information on our Plan Correction services, click here.