When the Grass Isn't Greener with More Plans, There's a Fix for That!

In our last Correction of the Quarter, we looked at related companies setting up different types of plans for their respective employees and noted that this sort of structure isn’t “necessarily” a problem when it comes to 401(k) plans.  Well, as usual, the devil’s in the details, so we thought it was worth diving into what happens when this is a problem.

You know by now that we won’t leave you hanging with a problem that can’t be fixed.  Heck, we don’t call this the “Correction of the Quarter” for nothing.  Fundamentally, there is nothing wrong with choosing to offer different benefits to different groups of employees within a controlled group (or within the same company, for that matter).  But, if you find you can’t pass testing with this type of design, it may have you asking whether the complication and added hassle of two of more plans is worth it.

To help you answer that question, we’ll take a look at two plans that are part of the same controlled group and offer very different benefits, revisit how to identify if there is a problem, and then ultimately how to correct one when it pops up.

Jim and Jenny Flowers, a husband and wife duo of entrepreneurs, have each established their own landscaping businesses.  Given the success of both companies, each has implemented a retirement plan for its employees.  Ladies Who Lawn (LWL) sponsors a safe harbor 401(k) plan, while Men Who Mow (MWM) provides a “traditional” 401(k) plan that is subject to the ADP and ACP tests each year.  Each plan covers 100% of the employees of the respective company.

Aware of the fact that their marital relationship and minor child create common ownership and therefore a controlled group, our pair of green thumbs chose to implement their plans at the same time to seemingly head off any potential issues.

While LWL and MWM approached their retirement plan establishment with the best of intentions, there were a few items they failed to consider.  When two related plans have identical provisions, they can be combined and tested as if they are a single plan.  In this case, however, the plans cannot be combined because one is safe harbor and the other is not.  In addition, Jim occasionally assists with LWL projects, so he benefits under that plan as well as the one at MWM.  Like weeds popping up in the middle of the flowerbed, these couple of details spoil the whole picture.

Here is a breakdown of the number of highly compensated employees and non-HCEs in each company.

The asterisk is for Jim.  Since he works for both companies, there are technically only 2 HCEs total in the mix. 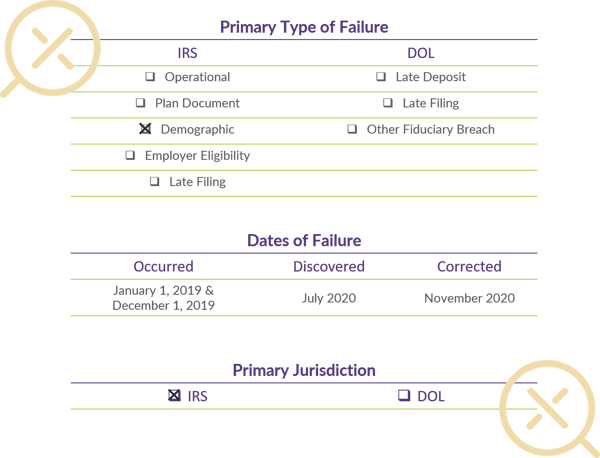 Since we’re not able to combine the two plans for testing purposes, we need to ensure that each plan independently satisfies coverage.  As a quick refresher, in order to pass the so-called ratio percentage test, the ratio of benefiting non-HCEs to HCEs must be at least 70%.

Let’s take a quick look at coverage under each of these plans.

So, this controlled group, specifically the LWL 401(k) Plan, needs some clean-up to get back into well-manicured compliance.  The basics of this “fix” include amending the LWM 401(k) Plan to bring in enough MWM employees so that coverage is satisfied.  In this case, we need to cover 70% of the 18 total NHCEs from both companies.  That means covering 13 (because there’s just not a good way to only cover 12.6 employees!).

The LWL 401(k) Plan must allow 5 additional employees to participate in the plan (13 NHCEs needed to pass coverage - 8 NHCEs already covered = 5 MWM employees).  The difficulty with bringing participants into the plan after the fact for 401(k) purposes is that you immediately have a missed deferral opportunity (MDO).  If this sounds messier than you hoped, we feel you.  If you’re thinking the owners of LWL and MWM are going to be less than thrilled with depositing contributions for MDOs when these same participants were able to defer under the MWM 401(k) Plan, you’re right.  Nevertheless, to correct the coverage issue this is a necessary step.

The Fix for Safe Harbor

For this fix, it all depends.  To determine how much, if any, profit sharing contribution will need to be made on behalf of these newly added participants, we’ll refer back to the plan document.  The profit sharing allocation method specified in the plan document (pro-rata, integrated with taxable wage base, or new comparability) will be our first stop in determining the profit sharing required for these participants.  The second step, if needed, will be another round of non-discrimination testing.

Depending on the significance of the failure and the timing of correction relative to the failure, some coverage failures can be self-corrected without IRS approval.  However, because this situation requires an amendment to bring in employees of a company that, though related, has never formally adopted the plan that is failing the coverage test, it must be submitted to the IRS for approval under the Voluntary Correction Program.

If these correction steps seem about as fun as weeding the flowerbed, we understand.  The reason we wanted to work through this scenario is that it’s more common than you might think for two related employers to assume they are sitting pretty if they both offer retirement plans.  While sometimes this is absolutely the case – demographics work out in the sponsors’ favor or the plans provide identical benefits – it seems that’s the exception and not the rule.

So how do you avoid this massive headache?  The upfront plan design and ongoing review is the key.  Detailed discussions around plan design at the outset, as well as a thorough review of each plan’s census, is critical to identifying potential challenges and helping set plan sponsor expectations.  For example, had the LWL plan simply excluded Jim, it would have passed the coverage test with flying colors.

Once the plans are set, they require regular maintenance just like your lawn.  As changes to employees, benefit objectives, business structures, etc. occur, it is of critical importance to review and revisit plan design.

If you find yourself with two or more related employers or think you might have related employers, proceed with caution.  While the IRS provides correction tools when things go awry, the most cost-effective (and stress-reducing) method is to avoid the problem altogether by carefully reviewing plan design at implementation and periodically on an ongoing basis.  Where you can avoid the need for the correction, the better!  Working through a review of related employers can be a thorny task but your DWC team is always happy to help you through it!  If you’d like to discuss related employers, coverage testing, or plan design, give us a shout!